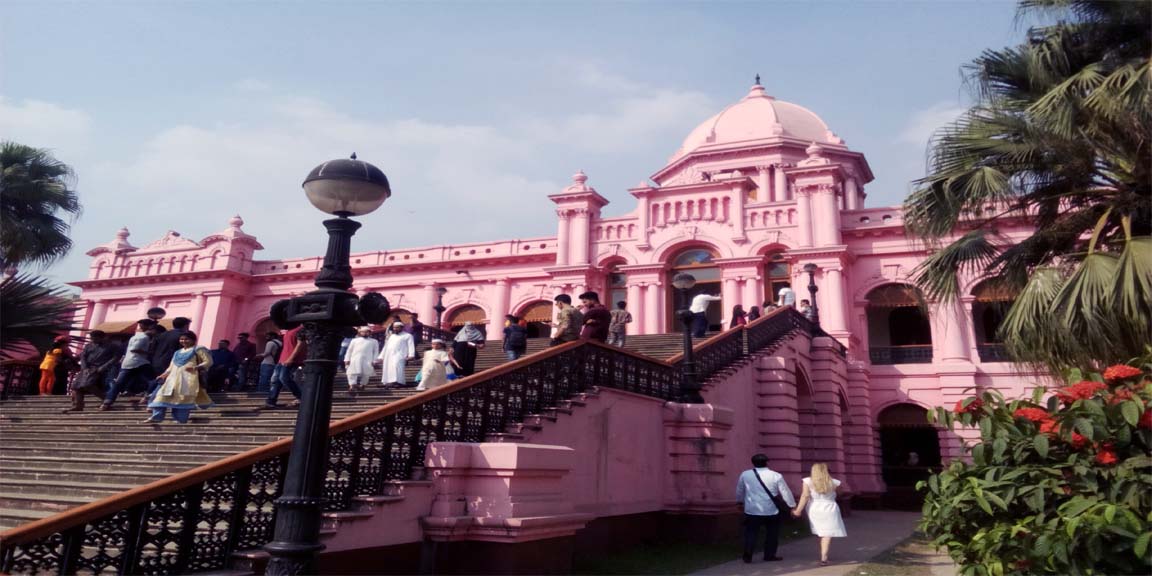 Ahsan Manzil is a building which is at Kumartoli, Buriganga river. Visit Ahsan Manzil in Dhaka City tour. It is one of the most architectural monuments of Bangladesh. The total area of this land is 5.56 acres. Two storied palace measures 125.4 M by 28.75 M. Hight of the ground floor is 5.8 meters. The thickness of wall is 0.78 meters. This building carrying huge information yet attracts native and foreign tourists to visit often. Everyday there is a big crowd of visitors at Ahsan Manzil. Its construction was started 1859 and completed in 1872. It was the residence of Nobab (formerly a Muslim ruling prince or landowner) of Dhaka. In the then period, landowners were named Nobab due to relation with British.

In Mughal period, there was a garden house of Sheikh Enayet Ullah. He was the landlord of Jamalpur (district). This man was a very charming person. Enayet Ullah had a big land and included in his garden. He built a beautiful palace named rongmohol (recreation). Ahsan Manzil house was a place to enjoy seeing program by beautiful girls brought from home and abroad. These girls stayed here by dressing gorgeous cloths and ornaments. It is said now that representative of Mughal emperor of Dhaka felt emotion to one the girls. So he invited Sheikh Enayet Ullah to join a party one night. Then he killed Enayet Ullah in conspiracy. This girl hearing the incident committed suicide in anger and sorrow.

You can see Sheikh Enayet Ullah’s grave in the north east corner of the palace. It was ruined in the beginning of 20th century. In around 1740 century, Sheikh Moti Ullah, the son of Sheikh Enayet Ullah sold this to the french traders. French had a trading house here which became wealthier later. French became much popular in business by competing with the English and others. They made a big palace (pink palace) and dug a pond for sweet water near this area. The pond existing now was called Les Jalla in that time. There was a war between French and English. British defeated French and the English occupied the property. As French failed, they sold all properties to the English and others.

French left the place in June 1757 with 35 boats from Buriganga. Khwaja Alimullah, landlord of Dhaka bought the trading house from French in 1830. There was some renovation work on the house to be a residence house of Khwaja Alimullah. After this Nobab’s death, his son Abdul Gani flourished it and named it Ahsan Manzil after his son’s name Ahsan Ullah. Manzil means house. In the east side, he made a house named Ondor Mohol (Inner house). On 7th April 1888, a devastating tornado damaged Ahsan Manzil. They abandoned residence.

Later they reconstructed it. After the death of Khwaja Ahsanullah in 1901, the glory was less because of their family quarrel. Then they started to rent out the land to tenants. Government acquired the land in 1952 and used in 1985 as museum. In 1874, Lord Northbrook, governor general of India came here to lay the foundation and installed by Nawab Abdul Gani. Lord Curzon came here to get the support from public for the partition of Bengal and stayed in this palace in 1904. In 1992 it became as Bangladesh national museum. Ahsan Manzil tourist spot is in old Dhaka tour. There is visiting hours schedule to visit Ahsan Manzil. Operated by Orient Tourism Channel.

Razbe was all theat we hoped, knowledgeable, responsive to our interests and professional. He met us at the airport and had planned an interesting time walking through the forest. He... read more was great at spotting birds and monkeys and even a spider's web strung across the path, very please I did not walk into that. Villagers seemed pleased to show us around and we saw different communities.
Thank you, would definately recommend the company and the country.